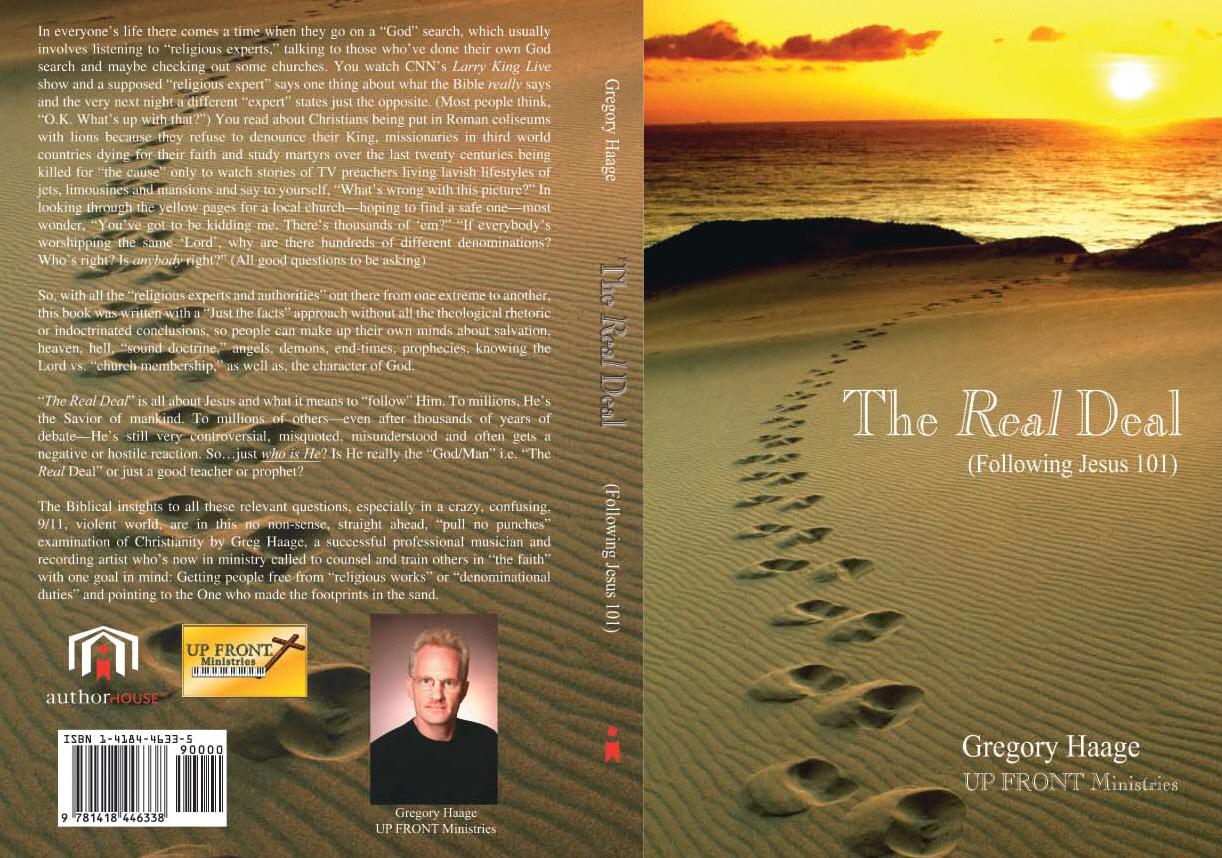 Because of the enormous amount of inaccurate and/or extreme Bible teachings on TV, online and print...Greg was given the God-assignment of writing a 300+ page, "pull no punches," book on sound doctrine and controversial topics called, The Real Deal (Following Jesus 101) published by Author House. Click here to peruse. If you're like most, you'll want the book in your hands:

Many have discovered how incredibly valuable this 15-year study and labor of love, resource book is. You'll want your own copy, as well as, for your Bible study group, church library and as a ministry gift to those pondering the bigger questions of life. It is written in a simple, "let's talk over coffee," Q & A format. The book comes in multiple formats, paperback, hardcover & ebook for iPads, notebooks and Kindles.

1. Surrendering And Pushing Reset  (Making the big decision)
2. Remodeling  (Renewing The Mind)
3. Mission: Impossible  (Finding A Perfect Church)
4. Burying Yourself  (Water Baptism)
5. Power: Don't Leave Home Without It  (The Baptism With The Holy Spirit)
6. **This chapter is being revised: Old T. tithe is NOT a New T mandate. Too many preachers have this wrong**
7. The Hem Of His Garment  (Healing: Questions, Answers, Controversies And Mysteries)
8. Once Saved, Always Saved?  (Eternal Security Vs. Personal Apostasy)
9. The Two Shall Become One Flesh (God's Design For Passion And Intimacy)
10. The Wine Question  (Abstinence--Temperance--Excess)
11. #1 Military Strategy  (Know Your Enemy)
12. Jesus Is God, Sparky! (The Deity Of Christ)
13. Whoosh Kaboom "Where'd They Go? (The Rapture and The Second Coming)

About the book: Written in a "Coffee talk with the Pastor," format:

In everyone's life there comes a time when they go on a God search, which usually involves listening to a religious experts, talking to those who've done their own God search and maybe checking out some churches. You watch CNN's Larry King Live show and a supposed 'religious expert' says one thing about what the Bible really says and the very next night a different expert states just the opposite. (Most people think, O.K. What's up with that?)

You read about Christians being put in Roman coliseums with lions because they refuse to denounce their King, missionaries in third world countries dying for their faith, study martyrs over the last twenty centuries being killed for the cause only to watch stories of TV preachers living lavish lifestyles of jets, limousines and mansions and say to yourself, What's wrong with this picture?

In looking through the yellow pages for a local church hoping to find a safe one, most wonder, You've got to be kidding me? There's thousands of em? If everybody's worshipping the same Lord, why are they so many denominations? Who's right? Is anybody right?" (All good questions to be asking)

So, with all the religious experts and authorities out there from one extreme to another, this book was written with a Just the facts approach without all the theological rhetoric or indoctrinated conclusions, so people can make up their own minds about salvation, heaven, hell, sound doctrine, angels, demons, end-times, prophecies, knowing the Lord vs. church membership, as well as, the character of God.

The Real Deal is all about Jesus and what it means to follow Him. To billions, He's the Savior of mankind. To billions of others even after thousands of years of debate He's still very controversial, misquoted, misunderstood and often gets a negative or hostile reaction. So just who is He? Is He really the God-man i.e. The Real Deal or just a good teacher or prophet?

The Biblical insights to all these relevant questions, especially in a crazy, confusing, 9/11, violent world, are in this no non-sense, straight ahead, pull no punches examination of Christianity by Greg Haage, a successful professional musician and recording artist who's now in ministry called to counsel and train others in the faith with one goal in mind: Getting people free from religious works or denominational duties and pointing them to the One who made the footprints in the sand.

"Pastor Greg Haage is a very committed person and has a hunger for the Word of God. His life is ever changing according to what he has studied and the fruit of that is evident in his life and his writings. I know him to be a man of strong convictions, moral character and I truly believe he is a genuine support to ministers, complementing the word of the Lord, turning to the Bible to be his guide. He is open to the Spirit to use him in many ways and has demonstrated that with the completion of "The Real Deal."

I believe God will use Greg's book and ministry to reach those that are badly bruised. To speak the hope and mercy of God to them, for there are many wounded who need healing in their souls. In this "labor of love" book, he is gentle in prodding people to the higher walk with the Lord yet speaks with authority in addressing things like legalism and "religiousity."

Greg both formulates and communicates very well and always gets to the "the heart of the matter." He's done us all a great service by including the original words and their meanings, with the multitude of scriptures he has examined. Actual texts, concordance and expository dictionary words along with his Spirit led insights, will make you really understand what it means to follow Jesus. I believe it's a much needed "cutting edge" work for both the seeker and the disciple. It's a wealth of knowledge in one book."

We who call ourselves Christians are often found arguing over our beliefs. Reading The Real Deal was very refreshing, as Greg Haage does a great job of providing clear and understandable insights that will help those who have struggled with some of today's more volatile issues. Greg has truly expressed his passion for those in the church, as well as, a rare sensitivity for those observing the church from outside its stained glass windows along with compassion for those who've been wounded by its teachings and leaders. His tender yet piercing style makes this an enjoyable read as he opens up the exciting aspects of God's Word that have caused some to question and some to go to extremes.

Personally, as a Pastor, I find Greg's insights quite helpful in bringing a very much-needed balance to today's communicating of the Gospel and he delivers this in a very contemporary, palatable literary style. You'll never regret spending time learning and applying this balanced look, that is conveyed in Greg's exhaustive study of our Christian faith, different Bible translations and the original texts.  Allow The Real Deal to aid your walk with the Lord as I have so it can have true substance and not just be a mere religious episode.

Free Preview: PREFACE (To those who have been traditionally taught and denominationally trained)

We live in an ever-increasing, technologically evolving, fast paced, computerized, oftentimes stressful world. There are many diversions, disruptions and distractions available to us. Many don't take the time to rest or seek out the deeper things of life because of the "day timer", job(s), investments, lawn care, etc. Americans are pre-occupied with "stuff" and "activities."  Right?

One of the greatest enjoyments in life, for me, satisfies both the rest part and the deeper things of life "seeking" part, namely spending time in the Bible. Reading the Word, especially the New Testament (the Gospel of John being my favorite) has now become my work, passion, ministry and "calling". To read, study and communicate it, correctly. If I can use an automobile metaphor, it's God's "owners manual". Looking for God to speak to you? A "now" word? A heavenly directive? Here it is..."Follow the instructions and you'll be alright."

"The Real Deal" shares my thoughts on the main focus of the Bible, Jesus, the Messiah, and what it means to follow Him, as a disciple.

Tough issues can be uncomfortable, for some, to discuss. They say "Just keep things light and don't talk politics or religion." (Personally, I like a stimulating conversation when the timing is appropriate but engaging someone in a heavy topic when they're not ready for it, usually backfires and can be and oftentimes is counterproductive.

So...politics? "I vote for the person and my convictions not a party or agenda." (I'll discuss issues but I won't wrangle)

But when it comes to the things of God...well, you'll always know where I stand. My conclusions about Him and His ways are more solidified since I've been called to full time ministry. I'm now fifty two, been married twenty five years with two great kids and I am a former owner of a successful music business.

Here's a brief background: I have a Bachelor's degree in psychology/marriage counseling, a Master's degree (M.A.) in Theology, am a Bible college graduate and an ordained minister of the Gospel. In all that time, study and preparation, I've learned a few things along the way--some things perhaps you can use and apply. This book is simply one more way that I can "serve" you because that's what true ministers and believers are instructed to do: serve, not dictate to or control.

Originally I wanted to share these things with people I had worked with in the music industry here in Minneapolis. The Working Class Musician, my first book, was an overview of my years with a "how to make it" format in the music business but more importantly it was designed as an "outreach" to those who are still working in studios, the club scene and casinos, and are exploring the things of God.

"The Real Deal" was written for those of you who are interested in, and inquiring about, the Lord, the Bible and the life of "walking in the footsteps of Jesus" but have been, shall we say, tainted by many wolves in sheep's clothing, "high profile" Christian leaders or TV evangelists in it for the money or have been traditionally indoctrinated. (Some of the things done in the name of God have been embarrassing, detrimental and even destructive) There are many literalists, legalists and liberalists out there supposedly enlightening the world.

"Literalists" believe everything in the Bible is simply to be taken, literally. No, the Holy Spirit is not a bird, though He is described as "descending like a dove." Jesus is not a sheep, although He is described as "the Lamb of God." When the Bible says to "taste and see that the Lord is good," it's a metaphor not literal. The list goes on. The Bible is full of metaphors, parables and symbolism. That's why we are to be like the Bereans of old and take the time to study. (You should always confirm what a preacher says. Always. I'm saying that as a preacher myself. You hear me say something: check it out)
Powered by buildyoursite.com
close lightbox